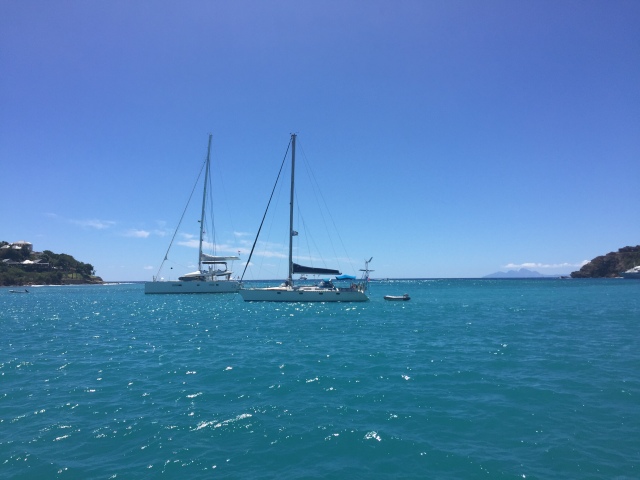 Presently writing from Antigua!! The water is as turquoise and beaches as white sand as the Bahamas and the people more friendly than anywhere. We made our way on ‘the perfect day- sail’ from Deshais Guadeloupe on an early Thursday morning. We weighed anchor at 0545, per captain’s request, and had sails set nearly before the first light of sun out of the East. We had anticipated an average speed of 5-6 knots taking us then 8 or so hours to cover the 42 nautical miles to Falmouth Harbor on this island. Our winds were nearly on the beam and waves from distant seas 6-7 feet hitting the starboard quarter bow. 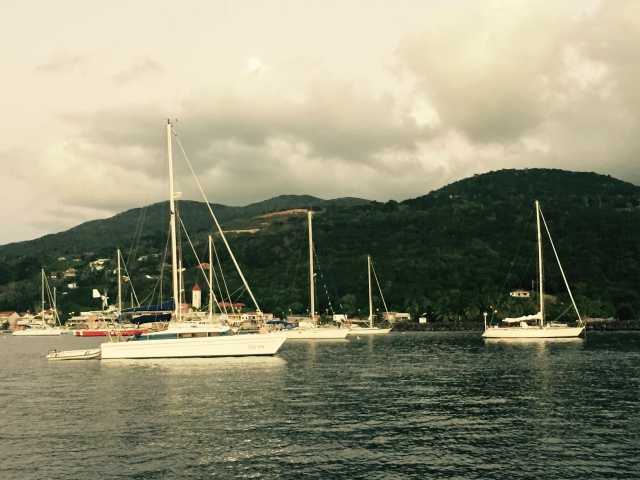 Once we cleared the Guadeloupe headland, Lost Loon proceeded to work her magic. Under 1 reef on the main and quite nearly full headsail , with a staysail set by sun-up we approached speeds of 7.5 knots!! Our thanks to the ocean gods for the easy seas. We enjoyed the movement and soon we were feeling the need for naps. We barely had time to rest as we were ticking off the miles and soon had sights of Antigua, while the giant island of Monserrat continued to loom to port.

In record time, we were anchored in Falmouth Harbor. A huge anchorage, it boasts many services and resort living. We were in awe of the grand international fleet of yachts at berth. A short walk to English Harbor from the dinghy dock and we were able to efficiently check in using Sea Clear and were granted a 3 month cruising permit to explore as many of the 365 beaches as we could. The customs office is located in Nelsons Dockyard, with cobblestone streets, great old stone buildings, and ancient cannons and anchors scattered about.

We made our way by sail and help of the motor in light winds the following morning to a perfect eastern anchorage by Green Island that nearly resembles any anchorage in the Bahamas or Tobago Cays. We found this an excellent spot in the settled winds to paddle board and snorkel some nice barrier reefs. There was a resort , Harmony Hill, that has an old sugar mill, ( sugar cane was a huge crop and still is is so much of the Caribbean….sugar Cane= Rum!). but it was closed and deserted, however proved to be a great place for photos. We experienced a night with infinite stars as we had little to no wind and were able to lay out watching the night sky.

Before arriving from Guadeloupe. We had made our way from the Virgin Islands. We had been there nearly a month with family and then friends. A year ago on our initial sail South, we had skipped through these islands as we had vacationed here much before. This year we spent time primarily on St John enjoying some spectacular beaches. We made several visits to Maho bay, Honeymoon bay, and Francis Bay. We also shared many of the great stops at Jost Van Dyke and Norman Island to our newcomers. By the first week of February we were waiting out high winds and seas to make our way to St Barths and ultimately Guadeloupe for a new set of crew!

When we finally found our window we had some serious seas to handle the first 24 hours to St Barths and then onto Guadeloupe we had expected and found more comfortable seas and weather. ( Fodder for another blog).

Guadeloupe brought us mixed weather, but we were able to enjoy some land based activities like Grand Anse in DeShais, The Rum factory – insect tour- animal display. Yes, that’s right….THE hugest collection of beatles I have ever seen. This would rival something at the Smithsonian!! And cause sweet dreams to turn to nightmares! Oh lest I forget the trip to the dentist!!

The story starts at a beautiful restaurant Poisson Rouge (red fish) at the Tendacayoo Spa and Resort,way up on the hillside behind Deshaies We discovered this gem of a spot one afternoon after a long hike up the Deshaies River. We curiously followed the little red fish signs up vertical roads and found a most peaceful locale for a spa and ‘habitation( french for dwelling). They had a few open air villas brightly painted and set where one could see the ocean miles below. 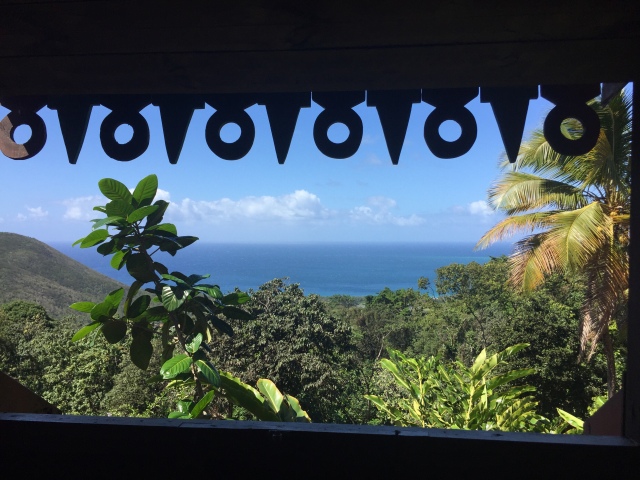 Ok, back to the story. Near the completion of a fabulous dinner here, Mike realized he lost a dental bridge placed 1-2 years ago. The following morning, using my best French, I was able to surprisingly negotiate a same day appointment for repair! We had obtained a nice car rental and with little difficulty located the modern dental office in the second floor of a convenience strip mall. The dentist spoke very little English, but his receptionist was able to translate well. In 20 minutes and only $75 US later the bridge was back in place and we were having our baguette et saussasion ( sausage, salami) on our way for more sightseeing. We were not questioned about insurance, we were not questioned about previous dental care or asked if we could pay up front! 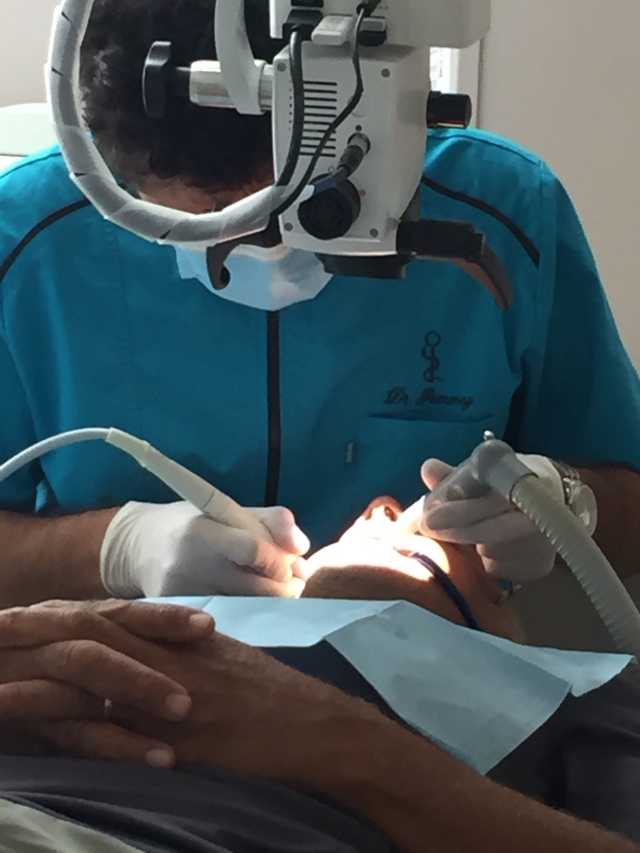 Our time in Guadeloupe put us back in Rivera Sens for a night. We had just returned from the village, and were contemplating Captains hour when we noticed a sailboat approaching a mooring ball( there are only a few of them here, so it seemed unusual as most folks anchor) with a man in the water ahead of the boat! Again, quite unusual site. We waited just a moment and then sensing some difficulty here, Mike was in the dinghy and off to lend assistance. As it turns out, they had motor failure of some type, and they were trying to approach the mooring close enough for the captain to jump in and tie them up. Unfortunately the wind had its way and pushed them off. Mike put our dinghy to work and after several attempts pushed and towed them to the mooring and tied them up! He did receive a round of applause and cheers from the gallery on Lost Loon as well as an extra ration of Rum! 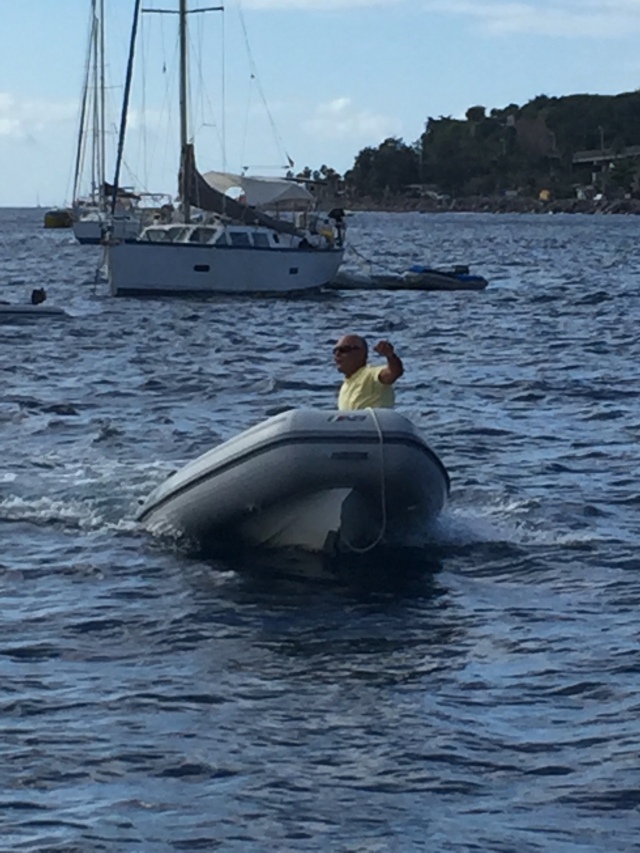 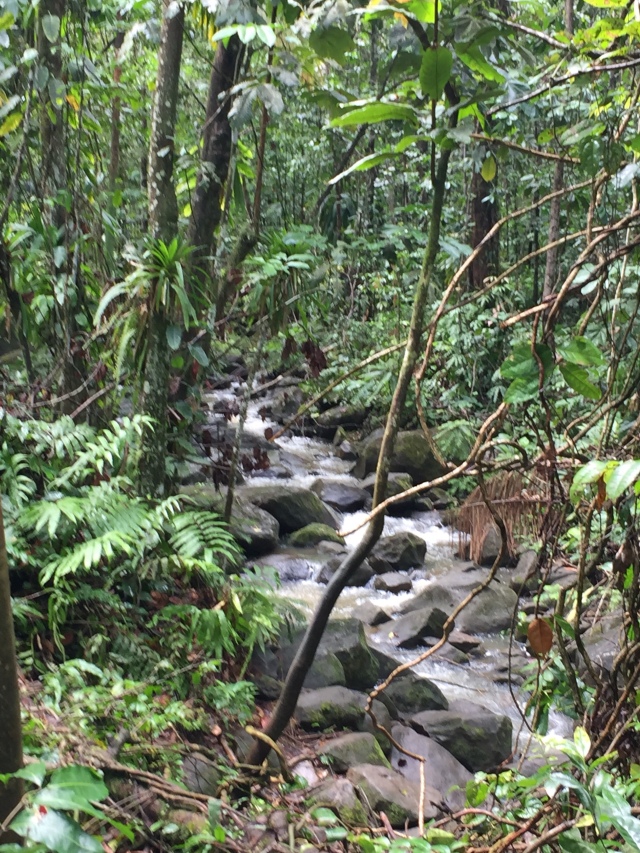 We were then onto Il de Saintes. One of our favorite locations south of Guadeloupe for its wine selection and boulangerie (bakery), with its great beaches and hiking. 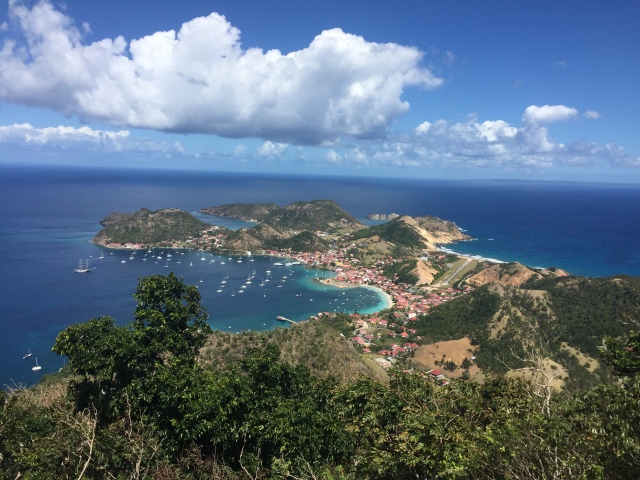 Antigua will have us as guests for nearly 2 weeks with friends before we start heading to the SE Caribbean islands and on our way to Grenada.

Up next…… Anatomy of a great sail and more Antigua. Thanks for stopping by….. come back and send your friends!!! Love to read the comments!!

Quick huge thanks to the following cast and crew who have made this winter so much fun:

Dave and Leah Magnine joining us in the Virgin Islands! First sail ever! 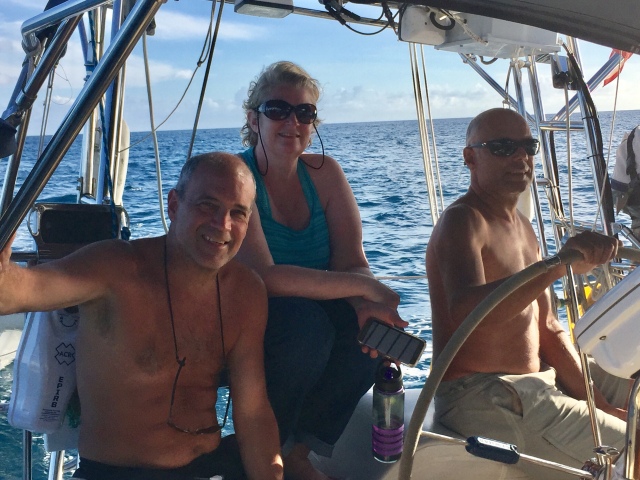 Kelsey and Lee also in the Virgins islands who found out the fun of seeking rain shelter in a ‘cave’ on Jost Van Dyke and getting the dollar rides on the safari bus to and from the airport…the cruiser way! 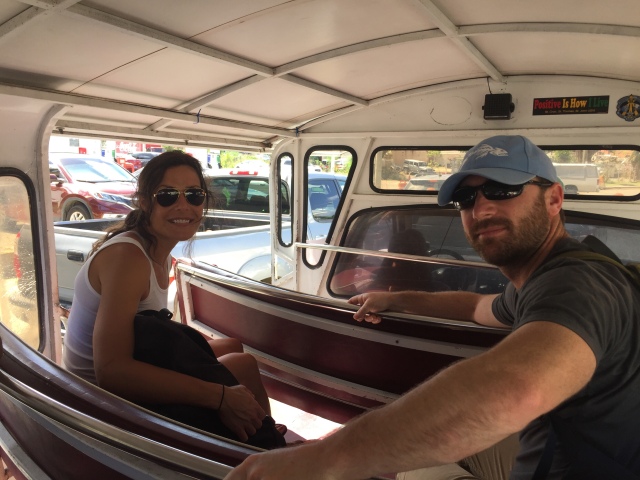 Jeff Bellairs , returning crew, who brought us the life-saving Rainman watermaker and found out Michael Beans’ Rum the night before a passage just doesn’t work. 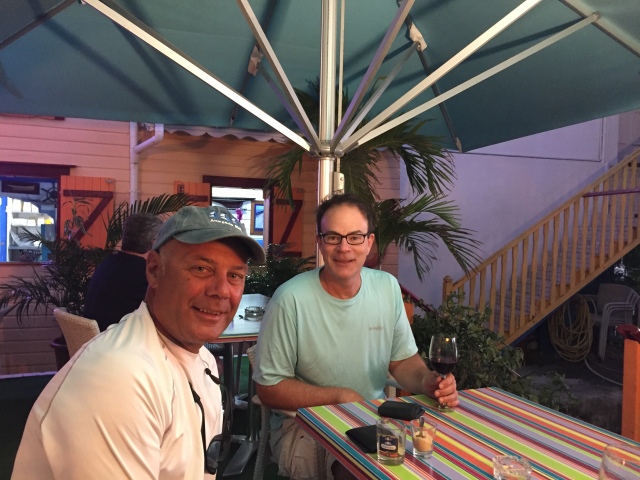 Ric and Mimi Goc joining us from California ….also returning crew… discovering one unique pool after another… the cruiser way! 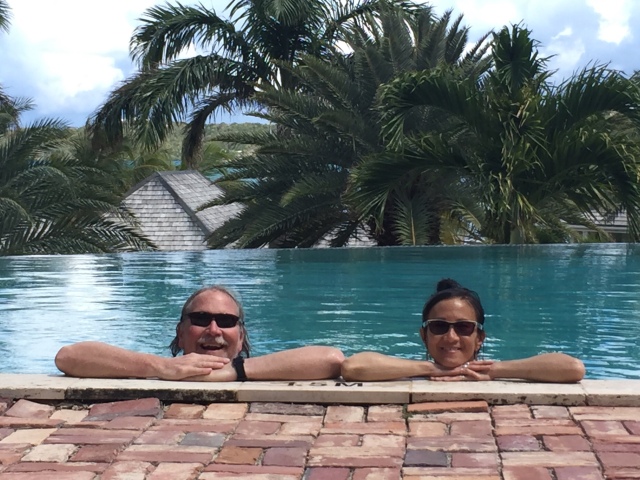