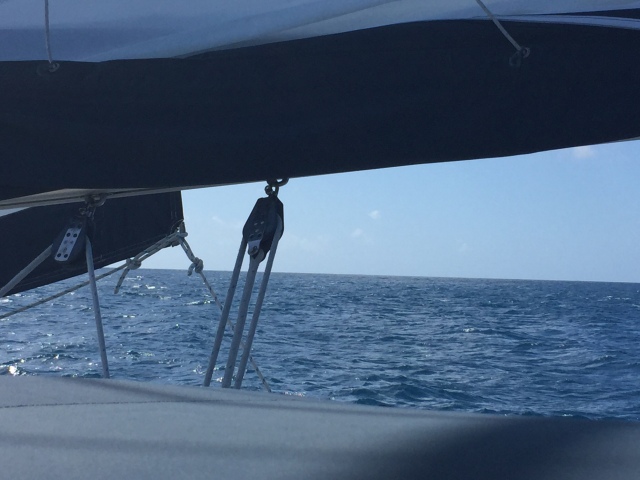 We have taken some sailing courses along prior to setting off in 2016, but one important trip in particular with John Kretschmer (www.yayblues.com) really solidified our desire and confidence in buying a boat and heading out on our own to sea. He offers a variety of sailing experiences around the world and I bet our 9 hour trip yesterday from Chateaubelair St Vincent to Rodney Bay, St Lucia in some pretty “salty” conditions would qualify as a day in the life of one of his heavy weather courses! Another thanks John, for your wisdom and on-going advice to give us the confidence to make this journey. 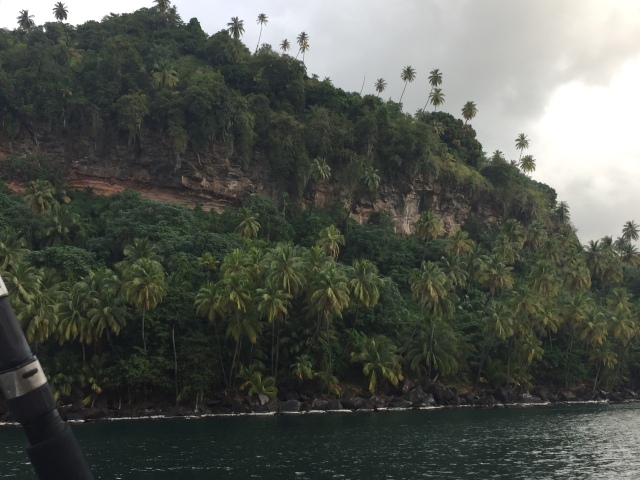 Our day started long before we had anticipated for such a weather-filled trip. With frequent showers and very little wind overnight in Chateaubelair it was mostly quiet. We had swam over the anchor to assure it was held in sand and some grass near the idyllic Caribbean backdrop on the north part of the bay. The numerous heavy downpours would be a foreshadowing for things to come the next day.We had not anticipated that the 50 ft Amel that dropped ( operative word- not backed down on) anchor 100 ft or more from us at 1800 would bump into us at 0400 the next morning.

Mike and I awoke immediately at the sound of metal knocking on metal, like the alarm going off at the firehouse, to sailors. Its an ominous sound. In the dark, we raced out to the cockpit to find the bow pulpit of the Amel peaking over the railing of our port stern. It’s truly a sleeping sailors nightmare to see another (huge) boat encroaching in on our space. Our brains attempting to clearly think …what to do? You dont just give her a shove, however we tried instinctively. Fifty foot boats dont just move when pushed by hand. We immediately started the engine and pulled several feet away from it. We know the lay-out of the boat and the owners cabin is in the stern of the boat, so likely they didn’t hear the noise until the engine started and we were talking and calling somewhat for them. The other option would have been an air horn, but we figured that would wake everyone in the anchorage. there was no use in that, yet.

Moments went by and she was creeping closer to us again as the sleepy captain and first mate of the Amel came on deck. Most cruisers can tell me what their first words were……… yep, “oh it looks like you have dragged anchor, ” as they calmly went about retrieving fenders from somewhere and placing on the port side of their boat as we watched. Mike was the perfect gentleman. I have seen him more riled up at catamarans anchoring in “our space”, but he just as calmly said, “well I’m not sure but I think WE are right where we have been all night in reference to other boats.” There was no accusation, no laying blame on anyone. They lit up their deck lights and examined the bow pulpit for damage, which we assured them didn’t exist and how lucky we both were. And again she creeped close enough for us to restart the engine and pull forward. In the calm of the windless night, there was a current, a strong one to pull them toward us. Our anchor we figured was already strung out as far as it would go, as were the other boats anchored near us we figured. The Amel’s approach was relentless. Despite the fact that they indicated they put out a good 160 feet of anchor chain, they were sure she was still set. Yet, they were reluctant to start pulling anchor as they silently realized that it may not be where they “placed” it the evening before. So we all sat patiently, as the current propelled her again closer, enough for a third start of the engine. It was now 0545 and there was a very little bit of light discernible in the East. We were all waiting for daylight in order to locate the position of our anchors, and for the Amel to make a move out of our space.

What is the best thing to do at a time like this? Well, make coffee of course. We knew we would not be going back to sleep and should get on with the caffeine fix for the day. As daylight proceeded to filter through the clouds, a few rain drops fell. We went about prepping the boat to sail. As I came out of PJs, I noticed the boat of the other crew had done the same and were collecting fenders. They were still only 10 feet to our stern. They asked if we were leaving and we indicated “at some point, but not immediately.” They told us they would begin moving and needed to anchor closer to shore to check into the immigration office there.

Now mind you, 160 feet of chain, right? Well, if they had put that much out and WE had dragged, we would see him moving quickly away from us as they collected chain to where he was “anchored” ( the previous night) nearly 100 feet away, but no. As they retrieved the anchor they pulled it up right there next to our boat and not anywhere near 160, or 130, or even 100 ft of chain retrieved. They had clearly dragged anchor on us. We bid them a good day as they motored away. No foul, no harm, thankfully.

With a hot cup of java already taking its affect on our senses, we waited out another shower, double checked that everything in the cabin was secure, readied the mainsail, and weighed our anchor. We had motored 10 minutes out of the anchorage before we began to feel the wind, swell and waves. We raised the main with 2 reefs, and put out just a “bikini bottom” of a genoa and set a course north. We tried to stay close to the shore thinking our heading across the St Lucia channel would be a better angle, but found that the waves and swell were actually playing off that shoreline slowing our progress as they continued to build on the nose. We turned just a bit more downwind and were able to turn off the motor. Despite the 5-9 ft waves at 6 second intervals, the 22-25 knots of wind was taking us at an acceptable 6.5 knots per hour. 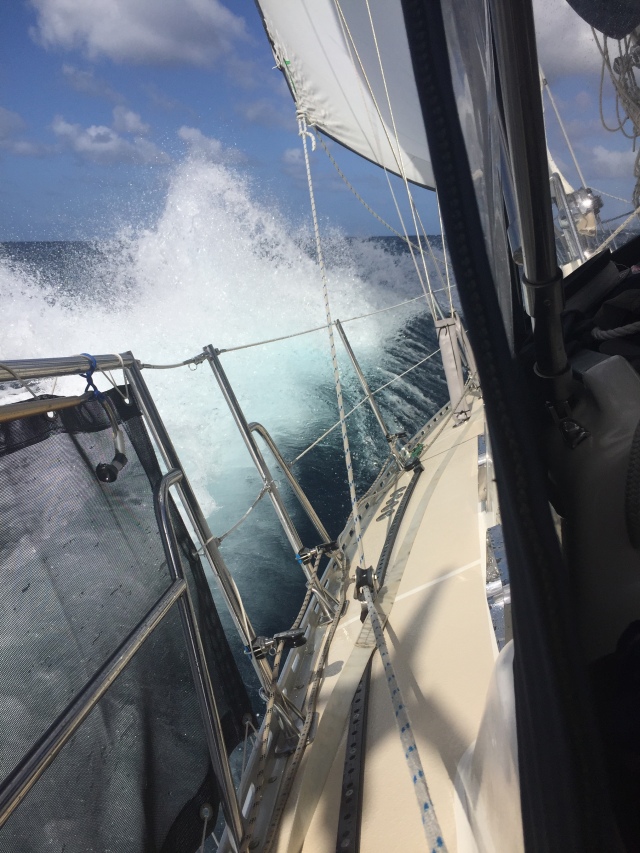 The waves continued to build as we headed into the channel between the islands, as it usually does and we were occasionally hit by some huge ones breaking over the bow, and onto the boat. We counted four that soaked the cockpit, thankfully we had the companionway closed off. Winds were steady from the East, putting us at a good 25- 30 degree heel, which puts the downwind rails underwater and makes getting a good stance challenging while manning the sails. It meant being ready to let out sail if the winds were overpowering our set up. If the sea salt soaking wasn’t enough, we contended with 3 squalls with winds up to 27 knots, ……but of course its fresh water we say, cleaning the salty sails!

As we approached the southern tip of St Lucia, near the Pitons, we were greeted by a huge school of dolphin. They seemed energized by the crazy sea and weather. They followed only for a few minutes, cresting and jumping across the bow and alongside the boat. With all that we were doing to keep on course, I couldn’t get my camera fast enough for any photos, sorry. It was a great distraction from the constant watch for the sea state changes.

The sun came and went, drying us off for another approaching squall, the last one, really a mere shower. We learned our lesson on previous trips here where the winds tend to scream around the pitons surprising us on even very settled days. So we sailed off shore a couple of miles giving the dear wind plenty of berth. With the protection of the island now, the seas settled and we found more comfortable sailing conditions. We had passed our refresher in heavy weather sailing. 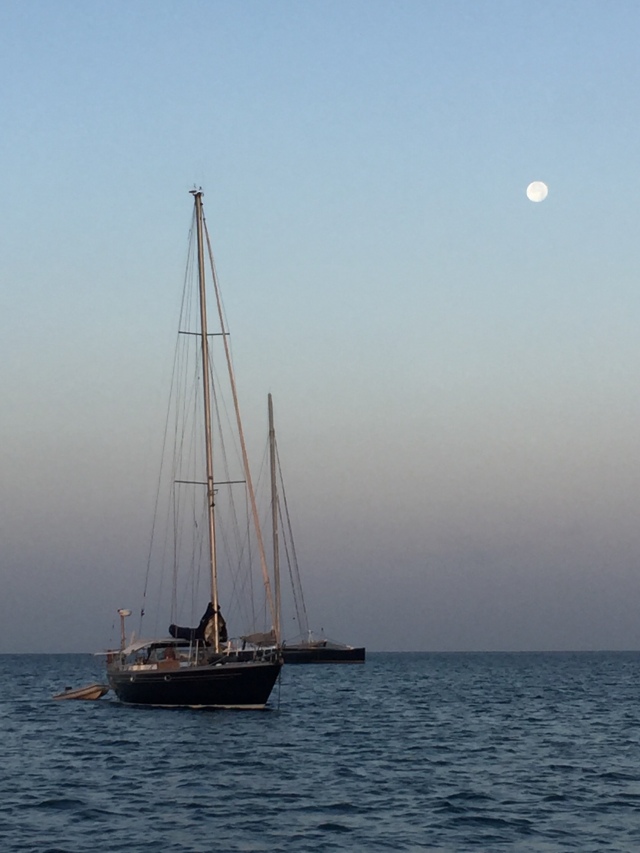 We pulled into the huge anchorage at Rodney Bay by 4 pm, nearly 12 hours after wrestling with a wayward Amel. With the anchor safely set in sand, a bit of fresh water to rinse the cockpit, the stainless and windshield, we were finished for the day. The Lost Loon had performed well , seeming to say thank you for keeping her safe from harm that morning.