So after 9 days of residence in Luperon Dominican Republic, we had finally waited for our weather window to Puerto Rico. We had also received our part for our wind generator we had been awaiting from Spain.We had tasted quite a bit of the food and culture in the DR and ready to move along. We had met 3 other cruising boats also ready to make the journey. We all had dinner the night before to discuss the travel route and have the last Presidentes ( beers). We retired that evening early with plans to check out of the country the next morning.

In order to comply with the country’s immigration laws we needed to present ourselves to all the same authorities as we did upon arrival. We would get papers that we would have if we needed to stop at another port in the DR before Puerto Rico. We were assured they would be in their offices at 0730 in the morning. We were up early to ready and prep the boat for the passage that we had estimated to be 2 days and 2 nights to Boqueron, PR. We arrived at the defunct dock at 0800 and proceeded through the offices. We were required to now pay $20 US to get our paperwork to leave. Following which we needed to present ourselves to the Commadante of the Navy to receive the exit paper, the despacho. . Since the bridge was out and the Navy without a boat ( yes! Believe it), we needed to walk to the office in a roundabout way, down the street, across another bridge, and up the hill to complete papers and retrieve the officials to take them to our boats. A beautiful location on top of a hill overlooking the harbor we presented our paperwork. The officials are dressed in army fatigues, no weapons, though. They do not speak a lick of English, but thry try to pronounce all the names on the passports, and we all laugh together. You are careful at what you say, lest you may be questioned about your readiness to leave. When all the boats had completed the process the Commadante and his assistant proceeded to take all 6 of us in 2 trips back to the dock, riding 3 on a scooter! We had 2 dinghies to transport them to each boat. You see,  it is his responsibility to see that we leave the harbor, and it is a requirement that we leave within the hour. ( the question is…. how would he even know we left without being able to check the harbor….sans boat??) Mike had the lucky job to move him from boat to boat to receive his approval. It is customary to present a gift, so we gave the crew 3 cokes for their effort. I waved them goodbye as they snapped my photo with the name of the boat and Mike drove them away. By the time Mike had returned them to the Luperon dock and then back to the boat I had 75% of the anchor chain retrieved and washed meticulously…( remember the filth? I had cleaned thick greasy muck from the chain links…thanks to the seawater wash-down pump on the bow…. it has been invaluable!)). The Engine was started and electronics were ready, but I couldn’t pull up the anchor. The windlass pulled with its might and stalled out against a stuck anchor right below the boat. I hear Mike yell, “just pull it up ” as we watch the 3 other boats in our informal rally exit the harbor. Were we stuck on a rock? What was holding it down there? I politely ask Mike to come forward as I laid on the windlass again.  As the boat moved forward it seemed to be slowly raising, to reveal a mess of an anchor covered in a rats nest of thick and narrow ropes. The anchor itself was barely visible. I quickly retrieved a sturdy knife by which Mike cut us loose. We had managed to tangle ourselves in numerous feet of old moorings at the bottom of the harbor. No telling how many there are. We had read stories of Christopher Columbus coming to this port to retrieve the Santa Maria after it was stolen from him at Bahia Isabela just west of this location……Could these be old anchor ropes from that many years gone by? It was fun to wonder who had used the ropes in the past.

With the anchor cleaned and now stowed we began our slow progress out the harbor, almost on time. We set sail in the cleaner open waters of the Atlantic to the east. Our first day was with variable winds and we made headway along the north coast of the DR. It was beautiful scenery as we passed enormous cliffs rising out of the water and big harbors along the way. As the tail-gunners,  we had a clear view of all 3 ships sailing before us in the clear water and blue skies.

As we rounded the  east end of the DR and headed into the open waters of the Mona Passage, it was late evening. It is known that the weather coming across the passage can be challenging. At the end of a warm day, the heat moves off Puerto Rico east to the passage and as it hits the moist air storms and squalls develop. We are thankful for none ( just as forecasted). The moon did not breach the horizon until 12AM. It brought light to the water and the environment around the boat. We sailed through the night with our 3 hour shifts. At dawn we had sun and less wind. We made contact with the other boats and determined their location. There was about 24 hours left of our transit. We rested during the day, fished, and passed the time reading about our destination, Puerto Rico. We looked forward to a new location, different foods, and different culture…..plus cleaner waters and better dinghy docks!!

Our second night presented us with great sailing winds. We reflected on the warnings for challenging weather on this passage and couldn’t believe our luck. We had what Van Sant refers to as ” unlikely event you have settled weather for the Mona”. With the water trickling behind the stern we cruised at times close to 6-7 knots. For ur boat that is excellence. We carry a lot of fuel and water, designated as a long range cruising vessel, so we tend to be slower than some other boats. By morning light we could make out a glimmer of a coastline, Land Ho! We began to sense the odor of land and vegetatio the closer we approached. 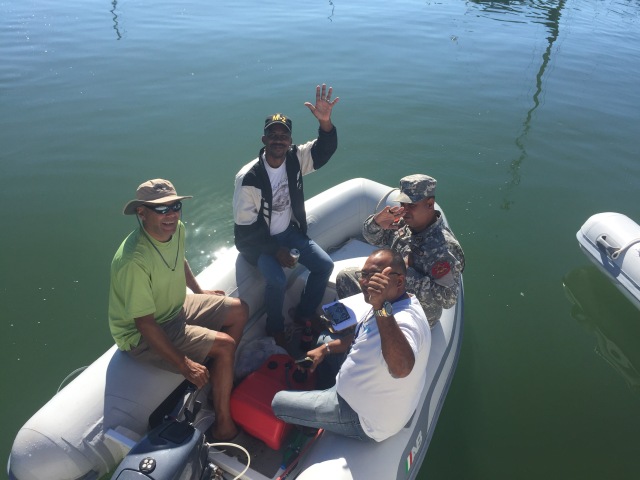 By 1030 AM we had anchored in waters of glass at Boqueron, PR. A long crescent beach lined with palms greeted us. We made a celebratory breakfast and then just one phone call to clear into US territory very uneventfully. Our rally of four vessels met that afternoon to celebrate the beautiful, safe and uneventful crossing the Mona Passage. We were now half way to our destination in Grenada. Our sailing trips now would be smaller day or early pre-dawn trips from island to island working our way only a little more east, and eventually a south rhumb line.