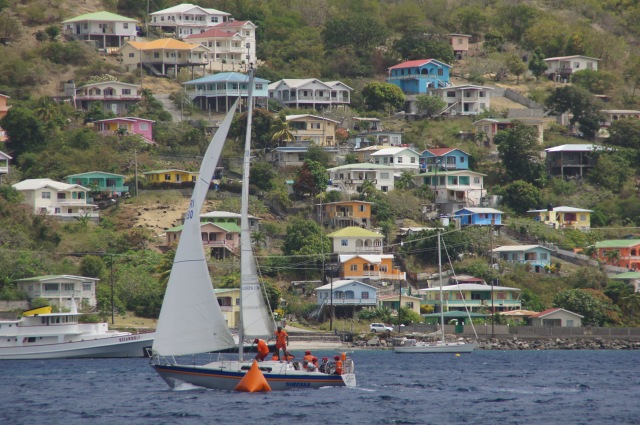 Saturday morning and its partly cloudy, there is a breeze out of the East (those are trade winds or “trades” as they are referred to here. It is the consistent and sometimes spirited wind that continuously flows through this region of the Caribbean). We are having coffee anticipating the 9 o’clock start of the Bequia Easter Regatta! We awake to find that the racing staff have placed the first turn bouys nearly right off the port side of the boat. Little did we know upon anchoring the day before that we would have front row seats at the start of the Regatta racing weekend!

We see boats of all classes out at 0730 testing the wind and warming up the crew with tacks in the outer bay. By 0855 they are lined up for the first class start. Horns blast and they jockey for the wind and best position on the tack toward the first turn. 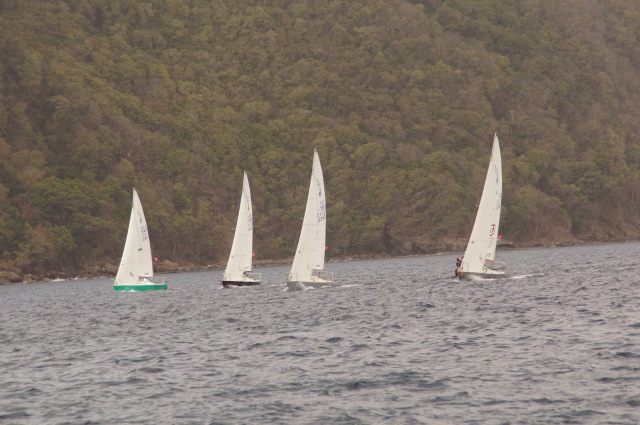 There are usually experienced boats and locals that come every year in the various classes. It was so much fun to watch each boat pass, some making good speed and others who lose the wind or need to change course to avoid collisions. We cheered them on as they passed (some a bit closer than others) and enjoyed watching the different tactics. There was (what appeared to be) a very close call at the first turn in the cruising class, where this enormous yacht and several other smaller sailboats were trying to make the same tack. Then as they made the turn from heading into the wind, East , to heading downwind Westerly, we watched as they deployed the spinnakers (some with better precision than others). Spinnakers are huge downwind sails that literally push the boat into forward propulsion. They are usually brightly decorated very lightweight sails, not unlike a parachute. They are sometimes called “cruising-chutes”. There were several classes of sailboats that had separate starts we were able to watch all following the same course.

The race would take them a few hours offshore and to the other 2 turns before they would head back to the finish (essentially the start line). By 12 pm we started hearing the horns blast and watched as each one came across the finish line, trying to determine if our favorites had won. 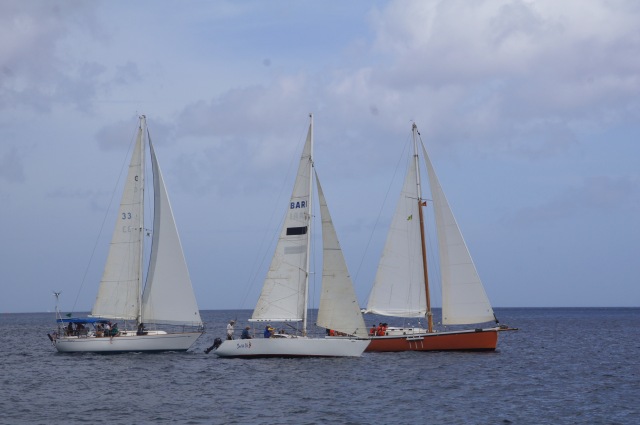 That evening we took the dinghy in to the race headquarters with the Northbound crew, Jacques and Sheila ,to see the race results. We were invited by a race official and chap who lives on the island to stay for free rum and beer during the awards presentation. And we did just that! Maybe someday we will have our act together enough to enter in the cruising class for fun.

Bequia is a beautiful island and we found all of the people to be extremely nice and helpful during our short stay. We would continue to make tracks the following day, Easter Sunday to Canouan, just south of Bequia.

No Easter Bunny or hidden eggs this morning. The sunrise across the glistening water gave us reason to bear silent thanks for sacrifices, beyond which we can fathom.

We woke to bright skies which turn to partial clouds in that reliable blue water, and the perfect sailing breeze. We were off before the 9 AM start of that days regatta races. Canouan would be a short 2-hour sail , a place where we would hope for good snorkeling. Lost Loon had a perfect sail with an average 6 knots in 12-15 knots of wind on the beam. We arrived at Charlestown Bay at high noon, bright skies and sweltering heat, like we had not experienced. (we had been told weeks ago…”it just gets warmer, then hot…I think we found it!”. We had anchored easily in 15 ft of water a bit offshore, as we heard that there were likely crimes for those taking up residence closer. We had unfortunately, had put ourselves out of the natural trade-wind. Our friends on Northbound were the first to make a move. After brief contact on the VHF after they anchored, they reassured us there was a cooling breeze. 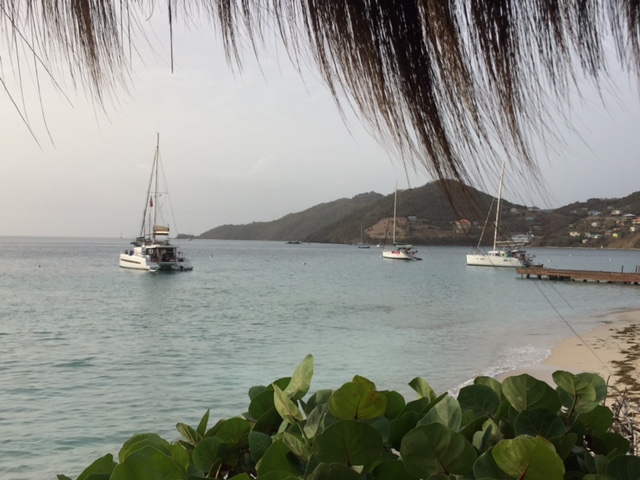 We were soon on our way as well. It wasn’t very far, around the coral headland about a quarter mile or so, and this time 20 ft of water, but a very little bit of breeze with the temp at 90 degrees made a huge difference. It wasn’t long before we had dinghies in the water and were headed out for snorkeling. Our ulterior motive was to find lobster, for this was one of a few of the locations in the Grenadines that we were allowed to hunt for them. We spent nearly 2 hours on our search. We found one fully inhabited lobster dwelling after another. Sometimes they were sitting 2 or 3 upon one another! The fishing rules do not allow for any breathing apparatus except snorkel, so we relied on our healthy lungs to take us 12-15 ft, with just a snare to first locate the perfect specimen, position the snare and then quickly tighten it around the carpace. We obtained only 3 or 4 that day. The water was a bit stirred up and murky (well at least that would be excuse we told ourselves). It wasn’t the prettiest reef we encountered on the trip, but with some good sailing friends we had a great time. Our afternoon took us to shore to investigate the island. We landed the dinghy at Tamarind Bay resort and made our way shore and found only a handful of staff about. It was very desolate this Easter Sunday. We decided to walk further toward the road and “into the town” but only found a few locals, some goats, and friendly stray dogs. It was mighty hot as well and since we didn’t find even a local bar open, we didn’t tarry long. However the Tamarind was a private resort (and quite exclusive from magazine advertisements we had seen), we were invited to stay and have a cocktail. We found some very comfy chairs under a palm-roofed hut, overlooking the water and watched the late afternoon sun begin to set.

The discussion that evening was to leave the following morning for the Tobago Cays. A trip that would be less than 5 nautical miles, but a place touted as the “Bahama-waters of the West Indies”! As we were making our way back to the dinghies, we began to see resort inhabitants appear (likely from their luxurious and cool accommodations) for cocktails and dinner. We, however, retired to a cool breeze and gentle rock of the westerly swell that night.

Tobago Cays and more of the Grenadines are next.