We made it!!  GRENADA

(April 27…thanks for hanging in there with us this summer getting these posted. Hopefully this next Winter we have better access to the WIFI and the posts come in a more timely manner)

This our final island destination on this Winter journey through the Caribbean !

We arrived from Carriacou on a terrific morning sail. We made about 30 miles in under 4.5 hours. That means we were doing some great sailing. We left the anchorage at Tyrrel Bay at 0815 and by 830 had sails up in a sweet 17 knot breeze. With a 1 reef in the sail ( which reduces the sail surface and in higher winds….which we expected….improves comfortable control of the boat) and a full Genoa, the wind lifted us to a record 8.1 knots!! ( ok, I think we hit 8.5 or 9 knots returning from the Bahamas last year as we hit the fast current in the Gulf Stream, but that was then….this is NOW!). That is cause for celebration alone. Caliber is listed by the brokers as a safe and sturdy sailing vessel, not known for speed. But she showed us this day, if given the right winds and sail she can fly! 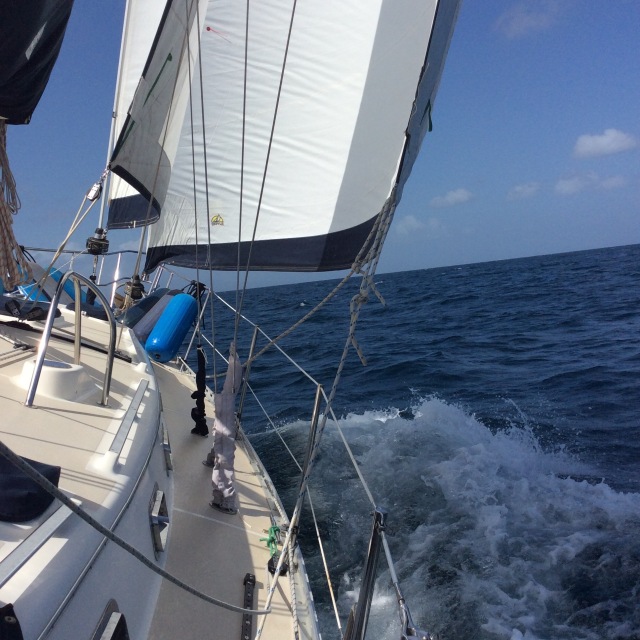 As we sailed south, before we started southwest to make it around the northern tip of Grenada there, we passed a few small rocky islands then an area with a submerged inactive volcano , known as Kick’em Jenny. 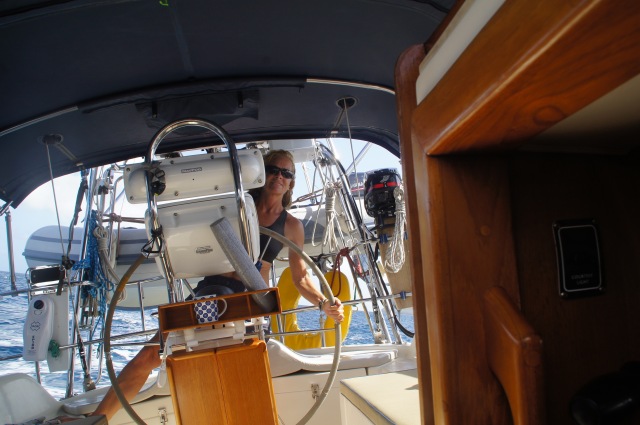 The map has a 5 km radius of exclusion around this volcano in case she were to become active. We were cognizant of the restrictions and sailed outside the radius. One scary thought is that when a volcano is active and submerged, it changes the botany of water and ships sailing or motoring over such an area will sink. Also we found that the ocean floor comes up from 4000 + feet to 350 ft in this area and it causes the waters to be quite confused. With a 18-29 knot wind and a bit of an ocean swell we had a short choppy ride through the ‘ volcano waters’. We imagined that someday there would be a small …or possibly large island here. Well, 3 days later, we are doing our morning chores aboard with the radio on and we hear that according to seismic recordings done in the last week there is evidence of possible volcanic activity and subsequently they strictly enforced the  5 km exclusion zone!!

We approach the lush mountainous island of Grenada and it reminds us of Guadeloupe, typical West Indies. Known as the Spice Island for its nutmeg, cinnamon, and tumeric. We see the steep-to shorelines and deep green color of the inland landscape. We round several bays and find our way to the major port of St George’s. It was here that a lot of the conflict happened during the coup of 1980s. Grenada was a strife ridden island that was at the time inhabited by Cubans who decided to take control of the island. Apparently, the prime minister was assassinated by his cabinet when the government fell into leftist hands. Realizing the possible problem with Cuba having 2 ports at either end of the Caribbean and then one so close to Venezuela ( petroleum rich) waters, we sent troops in to return the nation to Grenadians. We met a fellow on the beach, one afternoon,that told us that US and allied troops went through the country and tried to weed out the Cubans. They were assisted by the Grenadian who exposed their neighbors. Some locals lost their lives when found out, but at the cost of recovering control of their country. He told us of US helicopters that were shot down right in the bay we are now anchored. This was the same guy that came out to tell us the lounge chairs we stopped to sit on would cost us $10 EC ($4.50 US) per day if we wished to stay. Mike stood up (de-occupying his lounge chair) and talked to him about the history of the island.

St George is an old city. There are high cliffs upon which rest a prison and at the other end a hospital. The Carenage is the city that sits right on the waterfront. There is also a part of this port that accepts large cargo ships which bring supplies and food from Venezuela and Europe. There are fishing and transport boats moored up 3 fold waiting to take supplies to the out islands and Carriacou. The buildings are reminiscent of an old European village with old brick and stone fronts. There is a center city full of open markets selling fruits, vegetables, clothing, and other souvenirs. 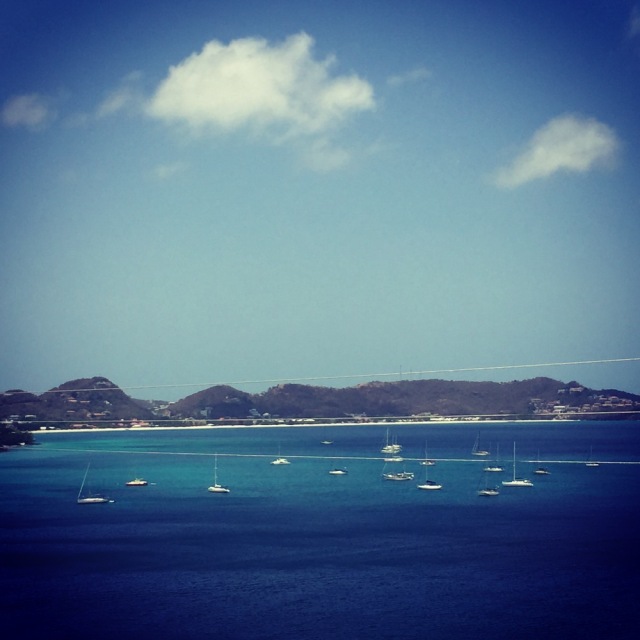 During the week the city is bustling with traffic, but by Sunday as we made our way through nary a sole could be found. It is a family oriented society and by mid-afternoon they were on the beaches and back at the parks enjoying life.

We arrived about 1 week prior to taking the boat out of the water. It is here that Lost Loon will wait, out of hurricane waters for us to return in November for another season. We decided that it was time to tarry as we began the process of readying the boat for haul-out. We spent most mornings cleaning and re-organizing supplies, deciding what things we would want to take back to the States and what things could remain safe for our 6 month hiatus. We would make a trip to shore to find our way to the marina where we would leave the boat. One morning we made our way to the dinghy dock, stopped at the chandlery and off across the island for Clarkes Court Marina. We figured we had about a 4 mile walk. We had great marine maps, but to find an accurate land map was nearly impossible. We did make our way to Lost Loon’s previous home at Spice Island Marina, and were lucky to get a shuttle ride to Clarkes. It was a sweltering day by the time we arrived. We were greeted by some great staff and showed around so we knew where we were headed on our approach.  As luck would have it we were able to catch a bus ride most of the way back to where we left the dinghy that morning.

WE would spend the next week and a half getting the boat ready for the BIG HAUL..cleaning and forever organizing.

Next up….decomissioning the boat for the Summer…and things I miss…a new family member (!)..summer projects.

Thanks for stopping and reading. Please find the comment section …leave your thoughts Love hearing from everyone!