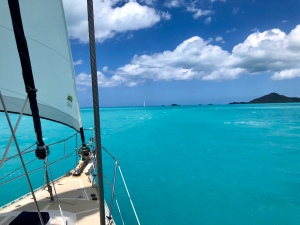 It has been great to be back on the water for the winter. That feeling when you have put some sail up and headed in some direction propelled by the wind with the engine off is heaven. There is a yearning for that gentle ocean lull and wind that sings through the sails that we have come to love. The clear blue skies and ocean to match or revel that becomes addicting. We have grown to adore the part of our lives on the ocean. It is however wonderful to spend time with family and friends in the Summer off-season

We are by far not as experienced as some of our acquaintances on this vast ocean, but feel that we have accumulated some liquid miles and continue to accept the lessons from the sea.

Our boat is built and outfitted for heavy ocean conditions and we like to think that we are becoming better at adjusting her to tolerate and sail these different situations. “She”, Lost Loon, teaches US as well. Nevertheless, we have developed some qualifications for a great sail.

First, we have intent. This meaning that we have a destination in mind but rarely a time frame. (This season is a bit different with guests coming aboard, time was of the essence, but it is not typically the case. For when they have come and gone we will be left to decide on the journey). We have limited our travels within the waters of the Leeward and Windward islands of the Caribbean and our eventual goal is to be in Grenada in May. 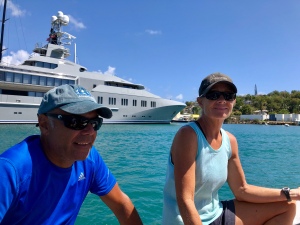 So, this means that we can travel as fast or as slow through the islands as we chose in a given time period, with the goal of exploration. We have done quite a few “overnight passages” some great and some we would rather forget, but we enjoy the daylight scenery when we can make it from anchorage to anchorage before the sun sets. However, all that being said, we are quite compelled by settled seas, good winds and the phase of a full moon to set sail!

Mike and I would agree in the nearly 2 winters here in the Caribbean we have had a handful of REALLY GREAT sails. On leaving Antigua for Guadeloupe 2 weeks ago we found such conditions. Previous to this we had time to spend with visiting friends on and around the beautiful island. We also met up with “old” cruising friends from last year for a few sweet days of boat talk and sea slang, and were fortunate in just a few days to meet new cruising couples. 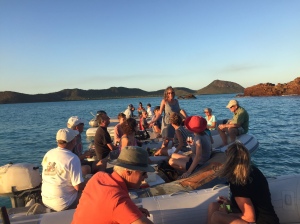 We had said our temporary good-byes (as they always are for seafarers) the evening before the sail, and settled in early to preparr for our day ahead. We had not made many day sails in the last couple of weeks and were quite anxious to get back into the open water again.

In our sail plans, we usually calculate our motoring speed at 5 knots as worst conditions. We had hoped to have and were rewarded with favorable easterly trade winds for our 70-mile rhumline South from Hermitage Bay, Antigua to Deshaies, Guadeloupe.

With coffee brewing in the press, we had the trusty 25 kg Rocna anchor up and secured on a very calm morning by 0530 and had begun our daysail on an early moonless morning, still with darkness. And to demonstrate how clear these waters were, with just the light of my headlamp I had enough visibility to see the anchor coming up from 20 feet below.

We were soon quietly motoring through the anchorage as other sailing acquaintances were finishing the last of their dreams for the night.

Once we were out of the anchorage, we turned into the little bit of a 9-knot breeze to raise the mainsail for the day. We insured we had 1 reef in the sail, despite the call for 12-15 knots of wind. This decreased the footprint we would use to propel the boat in the event we found some spirited winds over the 20-knot range. The sail is sometimes difficult to raise quickly due to the presence of lines that hold up the large sailbag on the boom (aka: stack pack lazy jacks) and the batons that firm up the body of the sail get caught here from time to time. But on this day, the first sign of our good luck, the massive sail went up without a hitch. We eased off on the sheet as we fell off the wind, heading more in the direction of our destination.

We spent the next 20 minutes going further offshore to see what the winds had in store for us that morning. As much as 20 degrees and sometimes 10-15 knot differences in the wind direction and force can be found offshore. Once we had a feel for the general, and consistent direction of the wind which was more like 45 degrees off the bow of the boat, we released the giant genoa. As I cranked on the winch to pull this sail in off the starboard side of the boat, we first felt the slight surge through the water and then the gentle heel to that side as Lost Loon gained speed.

Once the diesel was turned off, we heard the familiar sounds of first gurgling and then rushing water coming off the rudder behind the boat as we gained speed. This 13-ton vessel takes a bit to get going, but within minutes we were moving at nearly 6 knots in 12 knots of wind as the first sign of daylight became apparent over the mountains of Antigua. We set the staysail, to give us just a bit more lift before we felt we had maximized Lost Loon’s potential.

We were the only vessel moving that morning and felt we owned the ocean for a time, passing anchorages of sailboats sitting or rocking calmly until others became apparent on the horizon several hours later. We moved through the crisp, salty sea now with intent to make anchorage in DeShaies, where the space can be limited, by mid-afternoon. The water made several color changes as we headed from shallow to deeper waters between the islands. The waves we had expected to be in the 4-6 foot range, barely made 1-3 feet. This allowed Lost Loon to move as swiftly as she could without the backward push of the waves or swells.

As the morning became brighter, winds increased up into the 15-17 knot range propelling the boat into the 6.5 to 7 knot sailing speed! We were two pretty happy sailors. After just 3 hours we had covered nearly 20 miles, far out-reaching the conservative 5-knot per hour speed we had anticipated! We watched as sailboats in the distance came closer and passed making their way to Antigua and the outline of Guadeloupe appeared on the horizon.

We lunched on sandwiches and cokes, enjoying the easy motion of the boat. We were able to use the autopilot steering with someone at the wheel to monitor direction and speed. We rested in shifts as Lost Loon moved up and down the waves and through the wind. Nearly half-way between the islands of Antigua and Guadeloupe, in the early afternoon, I was at the helm watching for on-coming traffic or obstructions when I immediately spied water spouting right in front of the bow. I had seen a days-worth of flying fish skirt the surface as they so gracefully can. I took a second glance, and then realized that roughly 200 feet off the bow were a couple of whales moving very slowly across our path. It wasn’t immediately obvious, as sometimes small breaking waves can look like spouts, but it was definitely a whale. This would require quick action to avoid a collision. I quickly called to Mike and simultaneously took the steering off autopilot and made a redirection to starboard enough to clear these enormous fish. We passed within 40 feet to see 2 (likely humpback) whales just enjoying the sun-drenched afternoon.  Many whales inhabit the Caribbean, finding the warm currents perfect fishing and spawning grounds. Pictures? They will forever be ingrained in our memory, as I barely had time to avoid hitting them let alone get a good picture with the camera while Mike took over the navigation.

As we continued on toward our destination, the one-dimensional grey outline of Guadeloupe slowly developed into two and three dimensions. The colors also changed from the grey to blue and hues of green and brown became apparent as the mountainous outline appeared to take shape.

Our approach to the island from the north also provided us with some nice winds to carry us close to DeShaies anchorage before starting the engine. Since we have been at this location several times we know the good places to set anchor and tried spying with the binoculars to see if “our spot” was available. It wasn’t until we were much closer that we would need to find another sandy spot.

We have worked out a procedure for taking down the sails. Once the genoa and staysail are safely furled, we wait until we have room to turn in to lighter winds and lower the main into its sailbag for the night’s rest. We can now concentrate on where to anchor. We have the advantage with an early arrival that the sun is still nearly overhead and we can see sandy spots easily. We are anchored easily today, as our luck continues. Once we have the lines tidied and equipment stowed, its time to relax, rest and watch the others of the sailing world come to find a place of rest for the evening.

It was a great day of sailing. It erases the memory of the “not-so-great” sails (with that eraser that has sat in the drawer for years…they become blurry) and so we chalk it up to experience. It is from whence we can appreciate the good days. We watch the sunset and are thankful for each one. 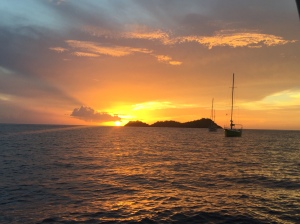 Sorry for the missing pictures! Must be a data problem.

2 thoughts on “Anatomy of a Great Sail…from my perspective”