We were up at 0500 on this January 28 morning to start our day’s journey from Martinique to Dominica. It is a 50 mile sail north. We calculate that with an average speed of 6.0 knots we should be sailing for 9 hours..assuming we sail and not have to motor much.

Despite the hour, it is still a night sky. There is a sliver of a moon, which doesn’t provide much guidance as we try to differentiate sky from sea heading off the anchorage in the direction that will see a night sky a bit longer. We spy the Southern Cross in the Southern horizon. It disappears quickly though as light appears from the east, along with all the constellations. We have not done an overnight sail this season, and with conditions like this there is a yearning.

As more light appears, we are now able to see to open the sailbag and attach the halyard to raise up the mainsail. As we motor a bit further, we begin to feel the breeze. It’s not for another hour until there is enough wind to catch the sails. Like that first snow, or the first jonquil of Spring, there is an ease of spirit and frank happiness we feel every time we turn off the engine and the sound of rushing water past the rudder takes over.

We leave Martinique after a very busy couple of weeks. We had spent most time in the southernmost anchorage of St Anne after our January 15 arrival and have enjoyed a busy social calendar since. We have played in a few bocce games, Mexican train dominoes, completed numerous hikes, rented a car with friends and spent time in the mountainous, windy, twisty gorgeous green rainforested regions that with every turn there is an ocean view. We consumed baguettes, Brie, and some of the best, but least expensive French wines! Many days we took the 2 mile dinghy ride to the bustling marine city of Le Marin for provisions and to search out parts. As I have mentioned before, due to the stress and strain on a sailboat, many things break. It is an uphill battle some days confronting the challenges of keeping everything running in good form. Our snorkeling proved to be quite successful most days, enjoying some beautiful reefs and the fishes that inhabit them.

We took one awesome hike to the Canal de Beauregard, aka Canal of slaves. This is an ancient aqueduct built by slaves in the mid 1700’s extends several miles through the rainforest to supply fresh water to the village of St Pierre. It is literally built along the slopes and you walk the wall, sometimes looking at thousands of feet below in obstructed. The wall is about 18 inches wide and the aqueduct is 2-3 ft wide and 3 ft deep. 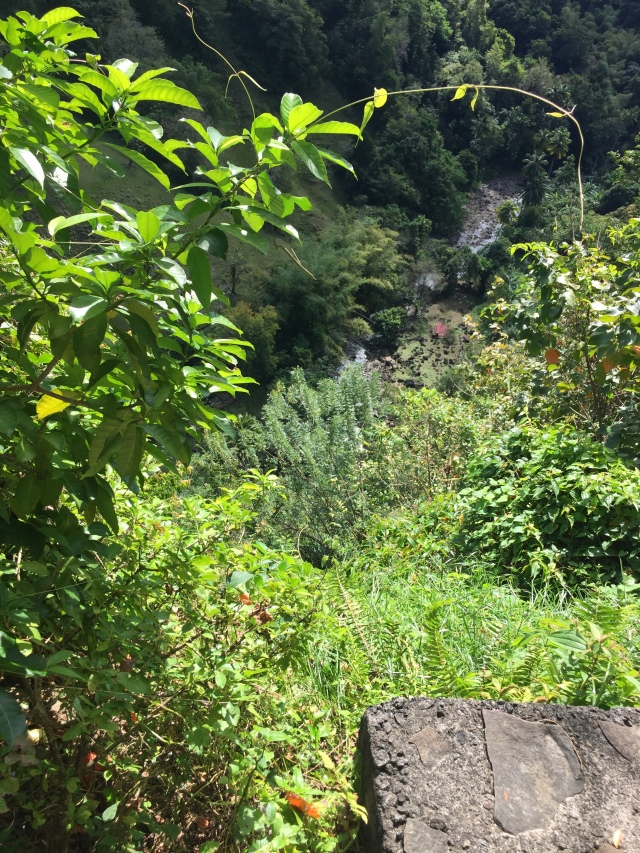 Before taking leave of Martinique though, we had made a few stops on St Vincent and St Lucia.

The island of St Vincent has a bad reputation for crime towards boaters as well as in general. As of late, there are people concerned about the tourism industry there and they are cleaning up their act. They have somewhat organized individuals into safety and security groups in many anchorages like that which is done in Dominica. The locals are trying to be there for the boaters assistance, and have tried to keep out the nuisance. We had heard from other cruisers over the last year they found it safe and so we left Bequia and decided to make a stop north of there in St Vincent. We had 3 other boats that we had been traveling with and they had made the trip the previous day. Our arrival to Cumberland Bay was on a light winded sunny afternoon. We had a nice sail and ready to anchor. Due to the volcanic formations, the anchorage are quite deep, even very close to shore. We were greeted by smiling faces and instructed on coming in stern-to. This is where you put the stern to the shore, let out chain enough to set the anchor from the bow and then back to a distance where one of the locals grabs a line from the stern and takes it to shore. Here he promptly ties it to a big rock or substantial palm tree. Quite the interesting process and used most exclusively in Europe. But, it’s like parallel parking, a bit more complicated than just driving into a parking slot.

This is how it goes…..we turn the boat facing out of the anchorage, and at the given moment I begin to let out chain. When we’ve hit 125 ft, Mike begins to back the boat. Now, Lost Loon is a great boat, but as heavy, nearly full-keeled boats go, they don’t back up worth @#$% ! But slowly and given no opposing wind, she begins her backward progress. We eventually see the anchor rode straighten out. We now give the longest piece of line to the fellow to take to shore. I then begin to let out a bit more chain so the line reaches shore. When our new friend has us tied to a big rock ( yep, I said rock…roughly 5 ft across and 2 ft tall. Listen they do this all the time, right ? I’m saying to myself), he yells at Mike to yell at me ( over the sound of the diesel) to take up some chain and thus secure us both stern and bow. Well, as I begin to take in chain I notice that it now doesn’t seem set. I feel the chain jumping, but it is taut. I relay my misgivings about the anchor being set to all hands. Of course, our concern is that if the anchor isn’t set in mud or sand or grass and we get a headwind, we’re on the rocks and Lost Loon is in trouble. Not a good scenario. So, our fellow unties the line to the rock and we begin to take up chain to re-anchor. I get to nearly 40 ft from the anchor and it won’t come up further. Mike maneuvers the boat a bit , I let out more chain and I try again, but it won’t come. I’m instructed to just keep pulling. The anchor windlass whines out trying its hardest , but it’s now obvious we are hooked, rather the anchor is stuck. We maneuver 2 or 3 more times, and turn off the engine. We now have a bevy of locals in their handmade boats circling. They finally settle and decide we need a diver. They can possibly get a guy for us. Mike gives me a reluctant look as he glances at the dive tanks we have secured aboard. I believe the first thing that crosses my mind is…we haven’t used the gear in a year or so and hopefully it all works.

I go below to dig out the dive gear while Mike dons his swim trunks. We are pleased when it’s hooked up and it inflates the BC as well as provides air through the regulator. As we are doing this our new friends in Cumberland have devised a plan where Mike will take a string with him to the anchor or rode and when all is clear yank on it and we will begin to raise it from the bow. This now requires me at the helm and one of the guys to come aboard to run the windlass. I give him instructions on the operation as Mike descends to whatever depth he needs. I am at the helm with diesel running, there is a guy feeding Mike string, another guy beside me watching for bubbles so we know where Mike is located, and 2 others giving encouragement from alongside as well. It seems like an eternity before there so a yell to take up the anchor. My guy at the bow does this perfectly…and we wait…as the anchor is seen below the surface there is another yell. Mike is soon to follow. Cheers go up from the crowd around us. We are thankful there is NO wind to move the boat and I can help Mike get aboard.

He tells us that the anchor fell to about 75 feet , but the chain was stuck in a crevasse where the wall came up to 35 ft. He just needed to pull the chain away as I moved the boat a bit forward to get the anchor straight up from the depths.

We promptly request to move from this spot to a flatter location on the far other side of the bay. We repeat the same process, but this time are now in sand and grass before we backed the stern to shore. It was beers all around for ourselves and friends as a thank you when we finally turnoff the engine. The next few hours we washgear with fresh water, hang it to dry and watch the little ones swim off the stern line. More boats came in that afternoon, but there was no one instructed to anchor in the location where we had trouble. A good learning experience….watch severe depth changes…they mean sheer underwater cliffs that really can screw up anchoring!!

The next day we enjoy a tour of the island by bus ..taking a hike, seeing waterfalls, petroglyphs, and some gorgeous mountain scenery. We even pass by one of the movie locations for Pirate’s if the Caribbean!

We move the boats in our newly formed Canadian-American rally to the next bay Chateaubelair. Here we check out of customs in preparation to head to St Lucia. We spend a lazy, rainy day, reading and find a break in the precipitation to snorkel the north east part of the bay. There is little in the way of coral, but manage to see much reef life. 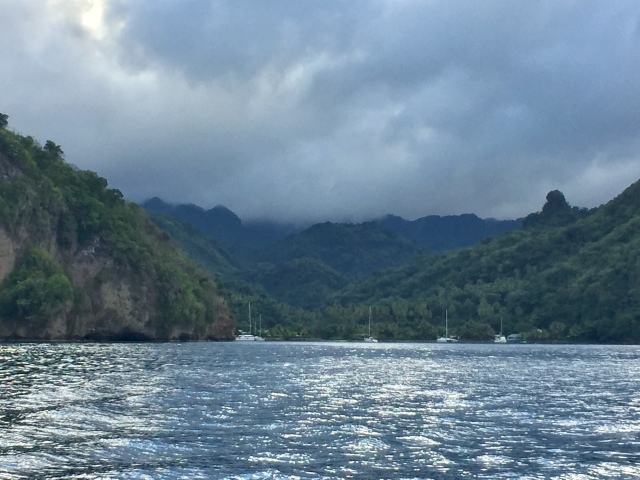 We make our next stop in St Lucia and we spend a number of days hiking a favorite spot in Marigot Bay, visiting rum factory, a banana plantation and take a bus trip to the bustling commercial city of Castries.

One of our full day’s hikes is along the very rugged northeast part of the island from our base on Rodney Bay.

Finally, after enjoying the long day’s sail from Martinique to Dominica, we are greeted by Alexis, a PAYS ( Portsmouth Association of Yacht Services) member. These are a group of men with their own boats who have formed a consortium to provide yacht services ( gas, laundry, water, tours) as well as patrol the anchorage at night.

Alexis gives us a wide smile, and says “Welcome back, my friends!”.

More to come on our week in Dominica !