We had moved Lost Loon from Brunswick GA to Stuart FL  on our trip in April, in anticipation of our trip to the Bahamas. We had only spent a night in calm marina waters after spending 3 days at the fuel dock due to winds so out of control that we couldn’t move off the dock. 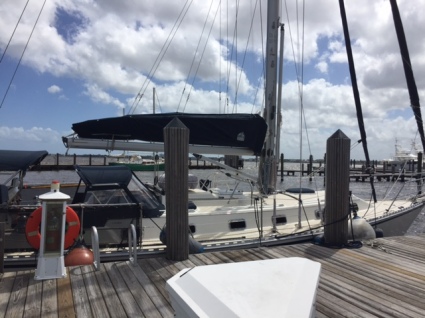 We had truly exhausted every possible option for springing off the stern, springing off the bow, etc..we just had too much at stake from the bow sprit to the dinghy davits at the stern. We woke up early the first morning, winds were very light so we decided to quickly shower and as we returned to the boat in a matter of 15 minutes the winds were approaching 17 knots!  We were welcomed again that morning by the Steve and Jim, dockmasters at Loggerhead Marina. We did take a ribbing for not getting her off the dock before the winds picked up, but we were assured that we were welcome to stay and weren’t in the way ….too much. We took the opportunity to meet some wonderful folks in the same dock area who gave us lots of great advice on the immediate plan to get off the dock, as well as our longterm plans for sailing the Caribbean. So it was not all a loss, being fuel dock residents for a few days. We finally were able to move Lost Loon at 6 am on day 3. We awoke to rain showers, but no wind!  We were up immediately as we realized this was our chance. Mike had the engine started and dock lines loosed before I was out of my PJs! We were able to motor across the fuel area temporarily dock, run around collect our fenders, and meander our way to our assigned slip on J-dock.

Four weeks later, upon our return to take our trip to the Bahamas, we spent 4 days getting all systems ready and 4 noisy nights trying to rest. I believe the first night that weekend we were so exhausted (endless days in Wisconsin packing and a full day of travel to the airport at 0500, transfers at the various airports and the delayed process getting a rental car for 24 hours, and a few stops at Winn Dixie and West Marine) we didn’t notice the commotion. The second night we enjoyed a calm evening at the dock, by the time lights were out and we began to drift off with visions of sugar sand beaches and bright turquoise anchorages, a new crackling, chewing noise had materialized. It sounded like bugs of some kind hitting the deck or rain pelting the boat. But it was clear, full of stars….. I pushed my hand out the port window, (because you can check the weather that easy on a sailboat) no water. We had not noticed ANY bugs as we returned from dinner that evening. I decided to leave the comforts of our new memory foam mattress to inspect the deck. No bugs?? No critters?? In fact a beautiful night, stars are visible, a light breeze, and stillness on the dock. Returning to bed, the noise continued. What the heck was this? As I began to fall asleep I thought of termites eating the hull or some other creature within the deep compartments of the structure…But its fiberglass, and that’s ridiculous!

Third night, lights out …the odd noise resumed. Did we just hear it because we were quiet? And was it going on all day? It was the same snapping and crackling commotion. I was determined to solve this. Lights on and looked in the bilge, it was clean…opened the closets, silent… I put my ear to the mast, nothing, and finally to the sole of the boat. Definitely coming from here. What kind of critter causes this constant noise? We mused all sorts of marine life as we edged into sleep.

The following morning, eyes open and I was on an internet search for (literally) “snapping noise coming from a boat hull”.  I immediately found that there is a particular shrimp that causes the noise. Mystery solved!  Thank goodness the hull wasn’t breaking apart. This was most interesting. The Pistol shrimp is a very small crustacean (not one for consumption). Its manner of attacking its prey is to shoot a small stream of water at 62 mph, stunning and killing its food. The water that is release at such a high pressure it can reach several thousand degrees instantly.

We watched the internet videos of the shrimp in action, quite impressive.( We mused that it is certainly unfortunate that they cannot naturally keep the hull cleaned of barnacles. ) What to do?..nothing. Live and let live…live and let the commotion continue…

Night four, with the continuous snapping and crackling going on, but we rest well. We are smarter now of marine critters on the hull. We are lulled to sleep listening to, by what we presume,(because we haven’t seen) are several hundred hunting , snapping, and feeding pistol shrimp (confident that nothing is “eating the boat”).