It is the night before our departure for the Bahamas and Caribbean. The anchorage here in Pompano is quiet, the sound of voices echo across the bay. Yes! There are Christmas lights that twinkle across the water. …I think back on Christmases and think of what we might be doing to prepare. The wind is calm (so far…we had 20-25 knot winds last night in West Palm Beach) . We have had some evening showers tonight with a temp of 77 degrees. There are amazingly….NO BUGS! I am, however, ready with the mosquito spray at the first sign.

We have had a beautiful 2 days traveling down the Intercoastal Waterway, making our trip South from Stuart , FL to position ourselves for a Gulf Stream Crossing tomorrow. We passed through 16 lift bridges today! (the whole ICW from Norfolk VA to Miami has about 80 opening/manned bridges!) As you travel this way, each bridge requires a radio call to request an opening. Most bridges plan to open on the hour or the half to best manage the city traffic. There were many boats travelling our way and passing at the same time through the bridges. It was like getting to Oz and having to make the great request to the bridge tender for him (or her!) to stop traffic and grant us passage.

At one point we were soooo close and yet due to the time the bridge closed as we arrived. This causes anywhere from a 15- 30 minute delay. It also irritates the Captain (Mike) who must now “hold” the boat in the wind and current in while we wait. For the most part we made good time covering 50 miles in about 8 hours. We made our 4:30 arrival just north of the Ft. Lauderdale exit in time to catch a good anchoring spot just off the ICW main thoroughfare.

We enjoyed Thanksgiving with some good friends in Punta Gorda this last weekend. We rented a car and headed from Stuart, where we left the boat in a marina. We spent part of the weekend looking at homes with our friends, did some biking, shopping at the local farmers market, and cooking turkey. Quite different from 90% of the Thanksgivings we have spent in the last 34 yrs together. We do miss being with our close family. 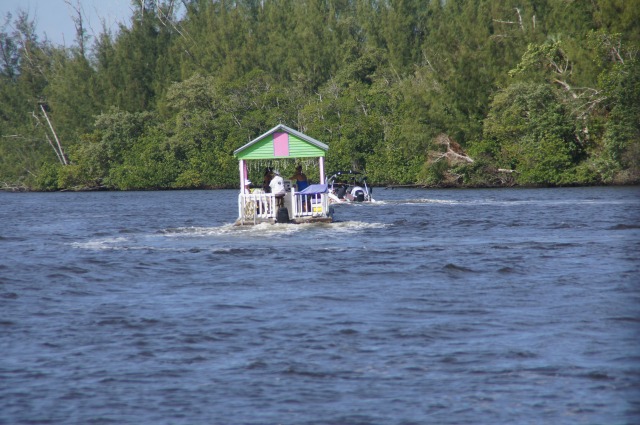 Upon return to Lost Loon on Sunday, we had planned on making our departure Monday morning, we had found however that our DC inverter was not working. We also realized that we needed some internet time to finalize a few things that we might not get to for several weeks. Mike worked on the inverter and called several reputable resources about how this might be set up on our boat. He was expecting a call back from someone that would have extensive knowledge about the unit, but never received the call. We decided that we would just have to manage without this and punt. Meanwhile, I had spent the day working with the Iridium Go satellite unit we have to download weather, contacted banks, and finished some emails. I am up every morning at 6:30 AM to listen to the SSB radio broadcast for weather daily, this lasts about 1 hour and through all the static try to transcribe the information we need to make decisions on sailing. By 6:15 pm, I was finished.

We decided (since we had turned in the rental car) to walk 2.5 miles to AutoZone for an inverter. We needed a way other than by USB to charge computers. (Such a problem Christopher Columbus DID NOT have!!!) 2.5 miles to return and one brief rain shower later we were exhausted. We made a quick dash to the marina showers and short dinner and by 9:30 we were lights out!

A very fast forward to Tuesday morning and we are ready to leave. We needed fuel and water. The dockmaster at the marina heard we had some “electrical problems” and had “just the guy”. He would send him over in a minute. (well 30-45 minutes later, we are organized and ready. Mike greeted the “chap” from New Zealand and began to describe the problem. He had a huge tool case, but asked first where the unit was. Mike opened the port side lazarette (storage compartment in the cockpit) , Mr. New Zealand reached down, pushed a tiny button and said, “there now go ahead and check it.” Oh man sure enough this was the 30 amp fuse that had blown, likely 4-5 days ago in St Marys when the power went off briefly. It was such a small thing…sitting right there,, didn’t even look like a fuse that had blown , right under our noses ( we had looked at that several times, but never put a finger on it). We apologized for our stupidity, laughed at ourselves, as did he and went about the task of leaving. We were at least happy that we gave the fella a funny story to tell at captains hour that evening.

So, it may be a while until we have WIFI to be able to post.

Our plans are to head through the Bahamas, Turk and Caicos, on to the Dominican Republic and then Puerto Rico before we hit the Windward and Leeward islands of the Caribbean. Continue to check back and keep us in your thoughts and yoga intentions! 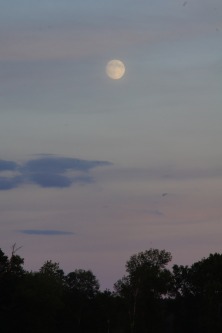 One thought on “The Night Before”