We made arrival and landfall at Meeks Patch, outside Spanish Wells, an anchorage in the northern part of Eleuthera of the Bahamas. We had intended on making a stop in the Berry islands, but we had such excellent weather we continued on another 70 miles or so (after our first 24) to position ourselves a bit further east.  They say in order to get south in the Caribbean you must continue East in “good weather”. This is because the trade winds (known as “the trades” and the prevailing winds in this part of the Atlantic) typically come out of the east or southeast.  And if that is the direction you are sailing, the wind is on the nose and it becomes most difficult to fill the sails. So to get East sailing you need to have a south or north wind. Well we actually had both, a south wind for a while and as a new weather system approached during the day we found some nice northeast wind to fill the sails for a while.

All the cruising guidebooks explain that one should make landfall during the daytime hours with some light overhead to watch for shifting sands and coral. What fun is that? Were here for the adventure right? We knew when we made our decision to head past the Berrys that we would not make a daylight landfall. We, of course, arrived by 8 pm with the only light from stars millions of miles away.  I positioned myself at the bow with our high-powered light shining for shoaling or obstacles. We followed the deep-water channels and found our anchorage.  This lie just outside of Spanish Wells, where we needed to clear customs. Anchoring in the dark can be a challenge: you can’t see more than the surface usually,  and communication from the bow person to the captain is more difficult as visuals are dimished. After spending a few minutes untangling the anchor that had managed to tie itself in a few knots in the locker, we were anchoredWe had now cruised for over 36 hours. We had slept on and off in shifts, but you usually don’t get the good sleep in 2-3 hour shifts.

At 9:30 pm, we found the ocean water a refreshing 85 degrees, perfect way to end a passage.

We were so fortunate to have some excellent weather since leaving Port Everglades in Fort Lauderdale on Wednesday morning. We woke early to get the first weather reports, make the coffee, and hoist the anchor. We left Santa Rosa in Pompano at 0700 as the light was filling in from the East. We had 4 bridges to traverse before we were out to open ocean, the first 3 were easy and the fourth we missed by just 5 minutes. We were greeted at this bridge by some incredibly enormous yachts, other sailboats, and sportfishing outfits all headed out to the big water.  There are navigation rules as to what type of vessel has precedence or the right-of way on the water, it is usually based on size and whether you are running a motor or if you are actually performing some type of work on the waterway (like fishing or dredging). We are a 40 ft sailboat, motoring, so just about every other boat took precedence over us at the SE 17th Street Bridge, our last to conquer. We were not only outsized but outnumbered as well. So, at about 9:25 on this Wednesday morning we had several 100 ft cruisers, some sailboats in our size range  some larger and even smaller, and numerous fishing boats waiting for the 9:30 bridge opening. It was like the geldings preparing at the gates for the Kentucky Derby. Boats were jockeying here and there. The VHF radio was active with boats calling the bridge tender to claim their stake on this opening.

We made it through easily, letting the big boys head out for their trophies and we cruised of out of US territory excited to sail.

Our first job at hand was to get through the Gulf Stream. The trick is to position one’s boat with southeast heading hoping to land just at the right spot east and work the current heading North. We did just that! With a 60 mile crossing we made it motoring in 12 hours. That put us on the Banks of the Bahamas, where the ocean rises from several thousand feet to just nearly 60 or less. We arrived here at about dusk and watched the sun set on day one of our offshore voyage. By this time we were ready to shut off the motor as the winds were I made radio contact with the maritime mobile ham network 14.300 to give a position and safety report (anyone can find us by checking out 14.300.net. There is menu item for vessel locations or check-ins and I do plan to call in when we are offshore and report a position), and we made dinner.

Since then we have had an awesome stay. We moved from out anchorage to a dock in town. Probably not an idea or the most quiet situation, but FREE! Situated by the local coffee spot and close to WIFI.  We checked into customs on Saturday. The local T-shirt shop had to call the customs officer to clear us in. The gentleman was nice and after about 6 pages and $300. we were legal in the Bahamas.  We ventured out to find a GOPRO SD card and walk the most beautiful beach. We stopped at the Snack Bar for conch chowder and a Wahoo wrap. We had been almost 24 hours with only a sandwich, so starved. Since then we moved the boat to a quiet anchorage with a private beach. We hiked and swam for the first time. 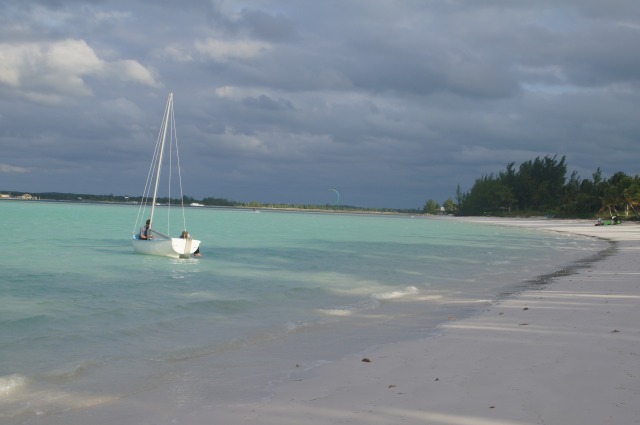 Today is December 5th, really 20 days until Christmas? The locals are playing Christmas songs at the grocery and passing the auto shop. It is very strange to not have snow…cold weather, or to be considering a Christmas  Tree.

We fueled up and filled our water tanks back at the docks this morning. Spent the afternoon anchoring the boat off shore again, snorkeling about a mile off shore (videos to come once I figure out how to download them from the GOPRO). I did think I was going to get laundry done, but at the price of $6. Wash and $6. Dry, I can do this by hand. Were using WIFI at the Buddha bar having some conch salad. Heading back to the boat soon, days are short and were busy most of the day, bedtime comes early. 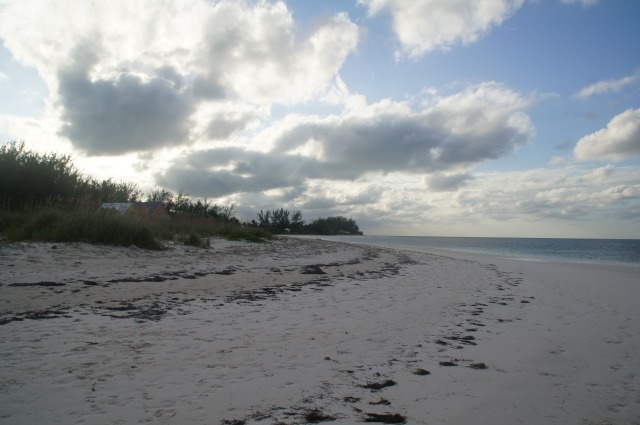 Until we find the next WIFI……keep us in your thoughts and intentions!

One thought on “Arrival in Spanish Wells, Eleuthera!!!!”