So the pics you see here in the beginning of this blog show us closing Lost Loon in May at Clarkes Court in Grenada. We were fortunate to have an uneventful process. The “carefree” sailing days are replaced with a few tolerable hot, dusty days in the yard. Bittersweet, we need to return to land life and see family as well as manage other parts of our life. As of this writing, we are now about 4 weeks from returning to spend another Winter in the Caribbean! The count down has begun!

We continue to live as vagabonds from one short term habitation to the next (or as gypsies..so well put by a close dentist friend of ours!) For the summer, we spent most of the time at our 3- season place on Lake Vermilion. We have completed the renovation we started last year transforming a 1950s cabin to a nice comfortable lake cottage. We also traveled to Illinois and North Carolina and spent valuable time with family in those locations. And of course passed several weekends with our Minnesota family and precious growing granddaughter! ( permission granted by the parents  allows me to share one of my favorite pics!!) 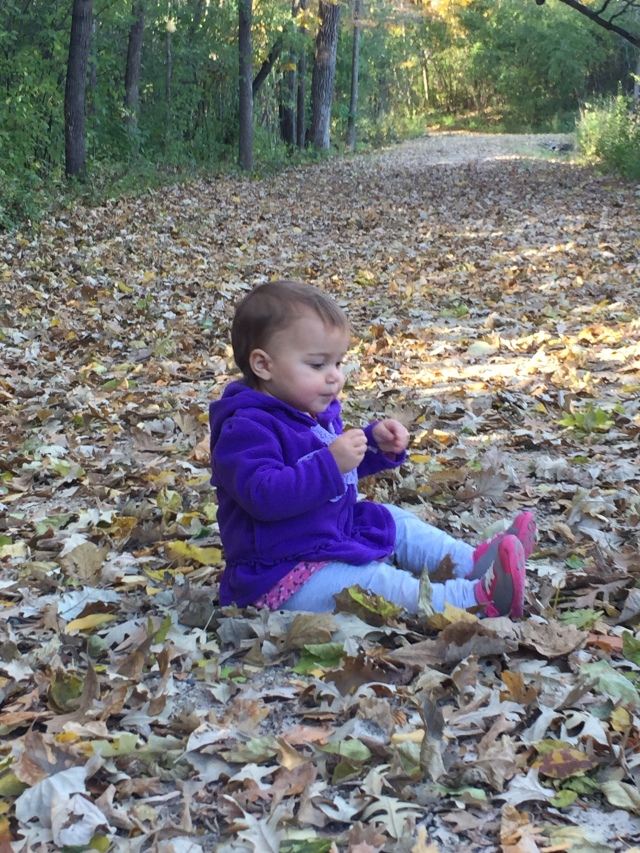 They have been gracious to provide us with a warm bed and sustenance throughout the last few months, as well as priceless moments with “nos petite fille”!

Our life on the lake is challenging because we are on the north part of the lake further than the road extends. We have to boat everything in we use. This includes ..yes even the new steel roofing supplies. Thanks to Mike and Chris…their ingenuity made this possible. 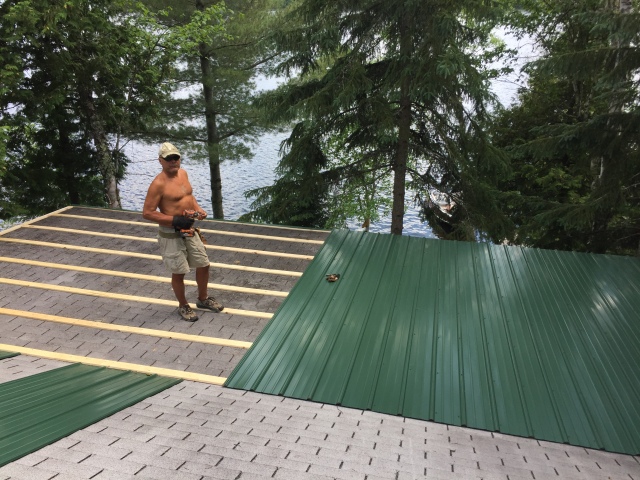 In making our new cottage unique, my friend Cynthia and I decided to paint a door. this was a very enjoyable weekend project..and priceless piece of art!

There were a few days we did get out fishing…a passion of Mike’s and caught some beauties, northern Minnesota walleye! We also received our scout firefighter’s badge one day. There was a slight breeze that afternoon as we headed out to Big Bay on the lake for musky fishing (truth be told Mike fishes and I make sure I have a good book). As the breeze picked up and the afternoon progressed, we noticed a plume of smoke coming from a small island. It became darker, and in seconds we could see flames from about 1 mile away. We quickly proceeded to the location, where we expected to find someone burning a huge fire. To our surprise, there was no one around and a large part of the island was covered in fire. I tried calling 911, but with variable cell service cut out. Mike drove to a close spot where we thought it would be better and 911 was calling me back! I spent some precious 5 minutes telling the dispatch person the locations of the fire, knowing he needed to communicate this with the fire boat. I was assured they were on their way asap and told not to put myself in danger. We ran across the bay and procured two 5 gallon buckets with the intent of saving the island.  We returned and inched the boat as close to the rocks without damaging the boat so we could get off. We were soon running a 2 person bucket brigade. We did have one other boat show up and with their 2 gallon bucket they had aboard, assist in putting out some of the “small stuff”, but there was a huge tree on fire that would take the professionals. Soon we saw them coming. as the fire boat approached we got off the island, noticing a small area where there may have been a campsite in the recent past….. Most of the fire was doused by the sole volunteer fireman. 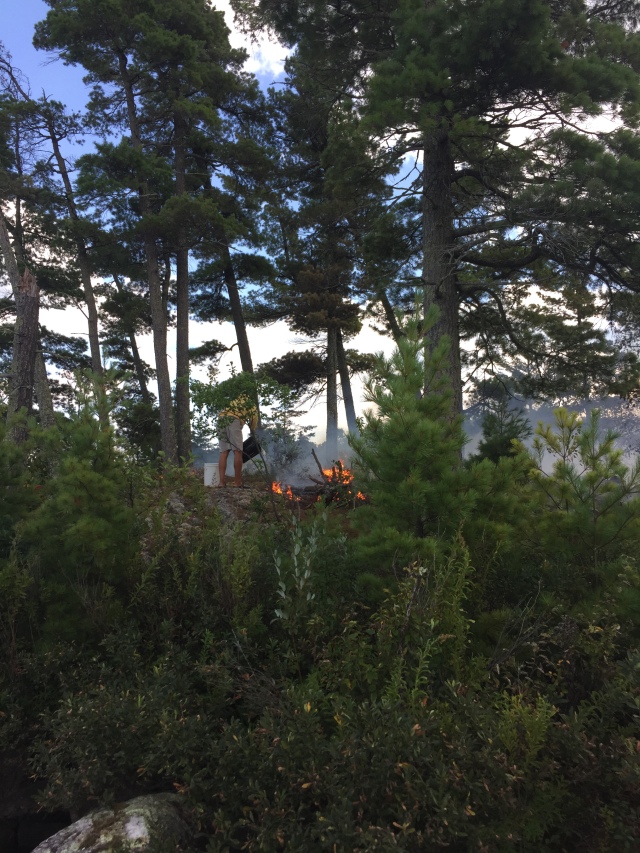 During the months in Minnesota, I was able to work part-time at a local clinic. ( a shout-out to my new colleagues in Virginia , MN!! thanks for a great summer!) I worked in the family practice and urgent care areas 2-3 days per week.  This afforded me the opportunity to maintain my license and continue to do something I truely enjoy. It was a mere 30 minute drive, but that was after the 20 minute boat ride acrosss the lake to get to the vehicle. This was not unlike our travels to get anywhere on Lost Loon. It was a great plan, most of the summer. I had only one late afternoon storm to wait out before getting Mike across the lake to pick me up. It wasnt until late September…my last days of work…and late days getting off work at 7 PM when arriving at the boat landing some days at 7:45 were getting chilly. By the first of October the days were chilly. We were having some night to 30 degrees and daytime highs of 40. 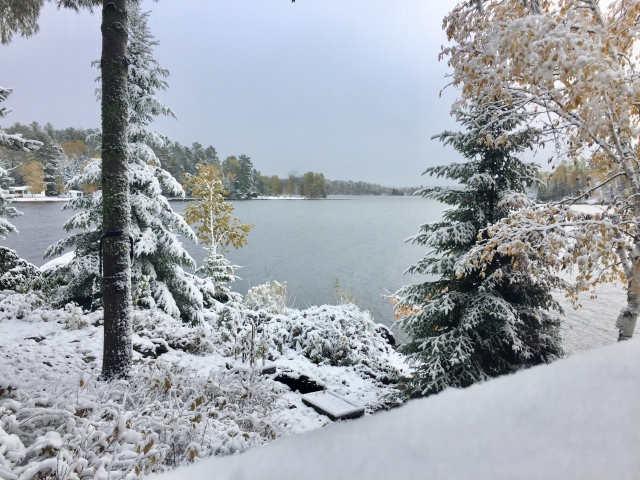 Yes, this is a picture of a 3 inch snowfall. Quite unusual and unexpected for this time of year. Mike actually had to snovel snow out of the boat for the first time since we have been coming to the cabin We are usually lucky to have until the middle of October to close things down, but by October 9th, we woke to temps in the very low 30s overnight and one partially frozen pipe. After Mike returned from thawing this with a hairdryer, we made the obvious decision to pack-it-up and head out. We had spent the last few nights, waking to check the water in the faucets and were not in the mood to wake to more pipes to thaw or worse broken ones! The job is fairly straighforward: pack clothes, clean everything out of the refrigerator, turn the water off and drain off the pipes, take apart the dock and lift it out of the water, cover the single pane windows with shutters. We have done this in an afternoon and were able to complete everything in about 3 and 1/2 hours. The sun provided us some warmth, but for this time of year, unexpectedly cold!

So the next question…..where to go?  We decided to remain “off the grid” and head for a shared cabin in Superior Wisconsin …intended for deer hunting. It sits on 100 acres of woods in the most northwestern part of Wisconsin, along the Minnesota border. We had a few hours to prepare ourselves for the primative  living…no plumbing, no running water, heated by wood burning stove. It happens to be just 8 miles south of the city of Superior, so not so far off the grid as it sounds. We stayed here 4 nights before moving on. We enjoyed a few nice Fall days of hiking and  bird hunting (the guys…not me).

After a couple of days with our family, we have traversed south for a few weeks with friends in Florida, boating and diving, where we will escape the onslaught of cool temps in the Midwest and dream of sailing days to come!

4 thoughts on “It’s all about being on the water…”